Each week, our panel of writers will be asked a question about the game of golf.  Topics will range from their predictions for the Tour season to what they would order from the concession stand at Augusta National Golf Club.  No subject is off limits for this esteemed group.  As always, reader suggestions are welcome.  Leave a comment or reach out to us on Instagram or Twitter to have your question answered.

This past weekend’s tournament is one of the most unique the season has to offer.  Some love it, some can’t stand it.  We asked our writers what they would do if they had to pick a famous playing partner on the links.

This week’s question:  Which non-golfer celebrity would you most want to play a round with in a pro-am format?

Jake Mulholland:  I’m limiting this one down to celebrities that I know are decent at golf.  I generally enjoy golf more if the person I’m playing with will shoot anywhere between E to +15.  With that being said, I also enjoy playing golf with players who are interested in playing well and not just necessarily whacking the ball around.  Points 1 and 2 are sometimes not correlated.  With those factors in consideration, I think I would really enjoy playing with Larry Fitzgerald.  He is clearly passionate about the game, often playing in the Pebble Beach Pro-Am and in addition, utilizes the game to give back (hosts an Invitational benefiting a Children’s Hospital in Fla.).  Larry’s NFL career has been outstanding, and his commitment to bringing his best every day is a quality we can all look up to.  His playing partner this past weekend, Kevin Streelman, has finished in the top 10 each of the last three years playing with Fitz.  At 85th in he world, I find it hard to believe that Streelman is just good at Pebble (Editor’s Note: he’s a stud, Rouge).  I would wager Larry is a big reason for Streelmans’ success, thus adding to my interest in playing with him. I think Larry and I would have an awesome time on the course, but more than that I think our conversations would be phenomenal.  A class act by everyone’s standards…it would be an honor to play with the future Hall of Famer. 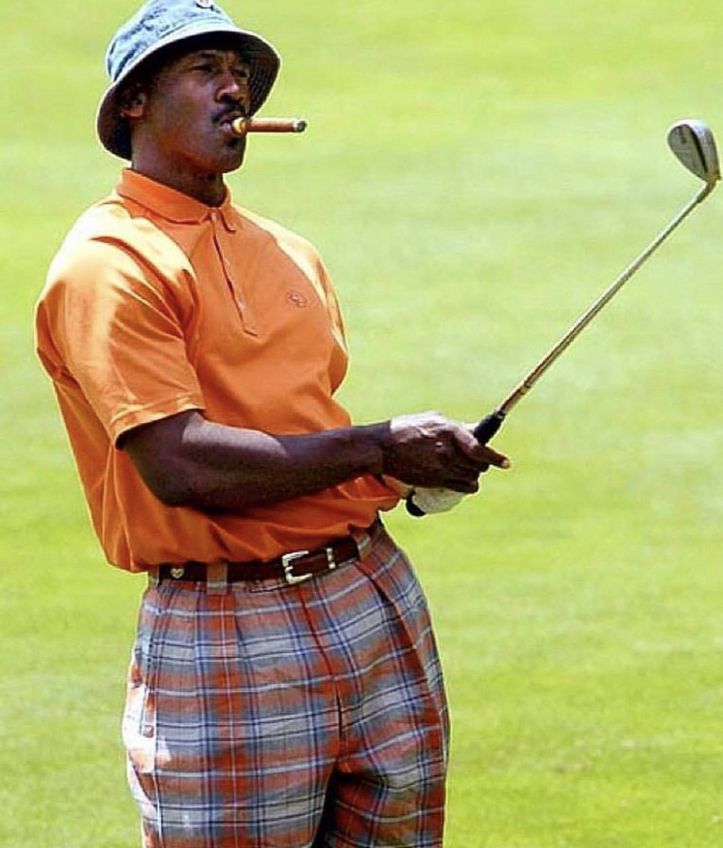 Bear:  The pinnacle of cool.  I could not imagine the stories that would be told and the action that would be placed.  Plus, he’s not too shabby at golf, so it wouldn’t be an awfully long round (See: Barkley, Charles).

Sean Carney:  A lot of good choices for this question, but I am going with Charles Barkley.  For one, he may have the most interesting swing I have ever seen.  How he navigates the golf course would be fun in itself.  Other than that, the dude is an absolute electric factory.  He is hysterical with a huge personality and feel like it would translate into a very fun round, between his old NBA stories and overall general antics on the course.

Frank Laterza:  For one, he’s good at, and enjoys, golf.  Secondly, he’s the GOAT.  Third, he is someone I’ve looked up to for years, and would love to just pick the mind of.  Also, I wouldn’t mind throwing a few cold ones back with the poster child of health, just to stick it to the man.  TB12 and FL8, sounds prettayyyyy, prettayyyy, prettay good.

Tony Kasper:  After all these years, there are still few people walking the planet cooler than this dude.  A guy that could keep things loose on the course and can play well is all I’m looking for in this format.  Of course I’d love to golf with anyone else on this list (especially MJ), but seeing as my game isn’t in the best shape, I’m just looking to have a good time with someone who can keep us in the mix.  His back would be sore to say the least, but he wouldn’t mind.

Kevin Walsh:  Great question this week. Not only does it fit with the most recent event, but it should provide a funny variety of answers with interesting reasons.  However, determining who I would want to play with in a pro-am format actually wasn’t as hard as I thought.  For one, there has to be a few boxes they check:

1) They must be at least reasonably good at golf. No one wants to play with someone who slows down the group substantially, can’t keep the ball in play, takes 6 strokes by the green before anyone else gets to hit, etc.

2) They must be a people person. Pro-Am’s are generally pretty low-key events that lend themselves to great fan interaction and give the people who follow a chance to get a feel for the personality of a golfer, and maybe even share a conversation or two.

3) They have to be at least relatively popular.  I can’t pair myself someone that is going to get heckled all day.  Even if it would be slightly humorous for me, it certainly wouldn’t allow us to have the most fun as a duo.

With these three things in mind, I landed on a few names who I’m sure could be heard from by more than one on this panel: Matty McConaughey and Denzel Washington.

Both of these men have their obvious great traits.  They’re both extremely successful actors and very well respected by peers and fans alike.  They both have given tremendous speeches at various ceremonies that represent their down to earth personalities that I think would fit great at a pro-am.  Denzel would be great to play with because people love him, he would have a fun time, and I think he would be a great guy to converse with over a round of golf.  Not only that, but I would be secretly hoping at least once he got super pissed because seeing Denzel “mother f” the golf course/clubs/or himself Training Day style would be epic and hysterical (https://www.youtube.com/watch?v=Lj4adAAHa68).

Even with all that in mind, I have to go with McConaughey.  I can’t pass up the chance to team up with one of my favorite actors and a guy who I think would be a blast to play with.  He’s got an infectious personality and always seems to be positive and laughing it up. He also loves golf, and he’s pretty dang good, which is a big bonus because not only would we be cracking jokes but we’d be hunting pins as well.  People love Matty, and I’d get a kick from the gallery inevitably saying “alright, alright, alright” or a number of other lines as we made our way through the course.  I’d also definitely incorporate his epic Lincoln commercials, re-assuring him after he goes OB that “sometimes you have to go back…to actually move forward (https://www.youtube.com/watch?v=aq5ecBaOb6Y).  Simply put, struttin’ through 18 with Matty M would be awesome.  Hell, I think we’d have a decent chance at winning the dang thing. Maybe one day.

Jack Corrigan:  Believe our duo on a golf course would be one hell of a time.  I would love to hear his Hollywood stories, and I’m sure he’d fire some Lone Stars back with me.  He also seems down to earth. I’d love a few round with Matty Mac!  I’m not a big musician guy, and playing with athletes could be fun but I want to hear about Hollywood, and no one better to hear from than a carefree, cool soul like Matty. He’d have a calm aura to play alongside, don’t think he’d ever let his playing partners get uptight and his verbiage would by hysterical to listen to.

Mike McNamara:  The Minister of Culture.  Guys like Vince Vaughn, Will Ferrell, and others came to mind as possibilities, but nothing would be better than teeing it up with Matthew McConaughey.  The self-proclaimed MOC would have endless stories throughout the round, and the banter would be incredible.  This is a guy that has seen it all and is as genuine as they come.  His brand is incredible and he is involved in all different walks of life.  I would learn a ton from Matty Mac and have a lot of fun with him, but you better believe I’d still be trying to beat his ass!