One and Done Picks, Rocket Mortgage

-Chez!!! He gave anyone on him, including Bear, an absolute scare on Sunday. A six shot lead dwindled to a one shot lead with two holes left. A birdie on 17 sealed the deal for Chez and Co.

-A T15 by Cantlay and RyMo allowed Frank and Jake to tread water.

-3 straight MCs for Sam after a really great stretch. C’mon brother turn it around! 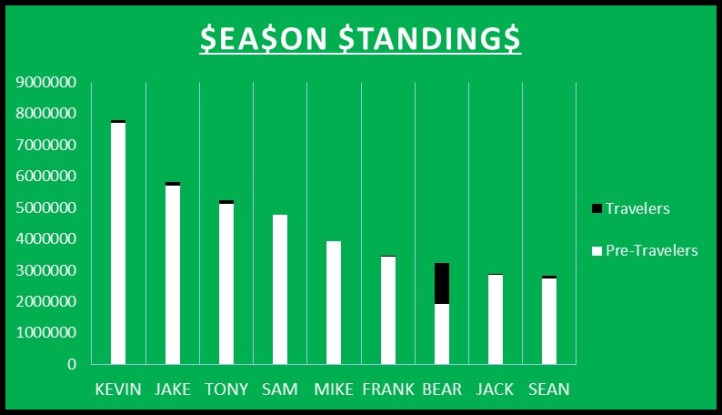 Kevin Walsh: Bubba Watson — Interesting week here, as the field is not very deep, and I find myself having limited options due to who I have used so far. After a short search, I decided to throw a Hail Mary with Bubba. His stats are awful besides Driving, and this is a course where there is no history for the players. Basically with the relatively short length of the course and 4 Par 5s, I am hoping Watson can continue to drive it well and give himself ample birdie looks. Because he’s been such a bad putter, ample may have to be 80+% of greens to be in contention. We’ll see what happens with Bubber this week.

Jake Mulholland: Kevin Kisner — I think people have forgotten about the Rouge. And to anyone who cares, he is not in love. Still way to early for that nonsense. Nonetheless, the Rocket Mortgage Classic is the perfect tourney me to get things back into gear… at least from the pool’s standpoint. Coming off 5 consecutive Top 15s and 3 Top 10s, I believe I am close to capturing my 5th career win. Long course this week at +7300 yards. Kisner’s lip will be the only thing thicker than the trees lining the fairways. I’m expecting another Top 10 showing this week and, if he’s rolling the rock, a second win on the year for the Georgia Bulldog enthusiast.

Tony Kasper: Sungjae Im — No course/event history to go off of, so taking DJ is a bit more risky than normal in a less than stellar field. Instead I’ll turn to a rook, but not “The Rook.” Sungjae has had a really solid debut season, but he’s been a bit streaky. This could be the weekend he puts it all together for all four rounds.

Frank Laterza: Ryan Moore — With such a weak field, {I am looking for one of the second tier guys to push through. Moore always seems to play well at these lower events, and I love him at +335 to finish in the Top 10. LOCK!! Let us ride Mr. Moore.

Mike McNamara: JJ Spaun — About as random a pick as you can get, but JJ struck the thing really well last week at the Travelers. This is a man capable of going low, and he believes he can win on this tour. Felt right to pick an under-the-radar name at a PGA TOUR event in Detroit, and I believe JJ is the man to beat. Spauner’s Army, Rise Up!

Bear: Harold Varner III — HV3! I’m looking for back-to-back wins here. Chez got me out of the cellar last week, and now Harold brings me to the middle of the pack. Time to eat.

Sean Carney: Viktor Hovland — I’m so far back in the standings it doesn’t even matter. We are going to take a flyer on Viktor Hovland this week. This field is pretty wide open, lacking a ton of the big names. Hovland has led the last two weeks in SG: Off the Tee. Given his length, hoping that trend continues since there should be plenty of birdies out there. This is a week Hovland can grab his first win, and he won’t shy away from the moment.

Jack Corrigan: Billy Horschel — A guy that seems to win a tournament every year and maybe this is his chance. He has made so many cuts this season but really has not contended recently. Think this is the week for Bill on a course none of these guys have performed on before.