One and Done Picks, U.S. Open

-The safest pick in human history worked out for Sean and Jack as Kuch picks up another top 5 at an under the radar event.

-Everyone else is just getting their bad picks out of them before this week! 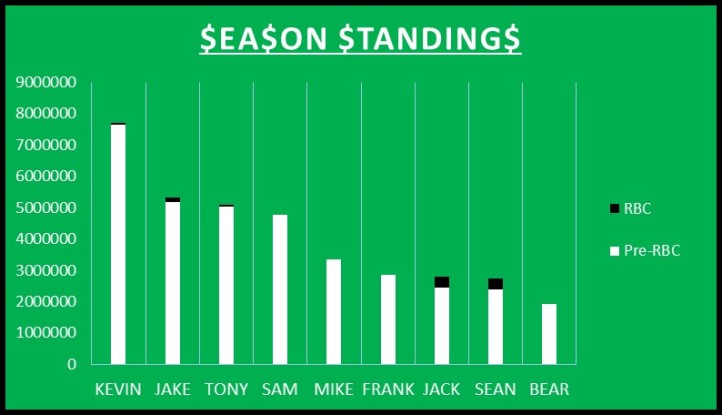 Kevin Walsh: Jordan Spieth — It is time for one of the most anticipated majors in quite some time, and if many of our hopes are to come true, there will be a whole flock of big names in the mix. Because I’ve already used DJ, Brooks, and Tiger, my next best guess for the winner this week lands on Jordan Spieth. The golden child has been playing much better golf of late, and we know he has an extra “it” factor that shows up in majors. Pairing his ability to post a number at the toughest events, and a venue he adores and has already won at, we could find ourselves with another major win come Sunday night. Either way, time to sit back and enjoy the show.

Jake Mulholland: Adam Scott — Rouge had a date on Monday so he was preoccupied with love and couldn’t form a write up.

Tony Kasper: Rickie Fowler — He’s had a strong season with 13/14 made cuts, a victory in Phoenix, and three other top 10’s to date. The key for him this week is finding fairways and staying out of the thick stuff. If he can improve on his driving accuracy (61% on the season), I love his chances. The sand throughout the course won’t be an issue for him, as he’s a wizard out of the bunker. He’s also been a great putter so far this season (15th in SG: Putting) who will be able to score and save when needed. The moment will not be too big for him; he’s been here before (8 career top 5 finishes in majors). The spotlight will be on Brooks, Tiger, DJ and Phil, but Rickie’s breakthrough will be this weekend at Pebble.

Frank Laterza: Jon Rahm — Way too under the radar. Rafa Nadal took home the French Open last week for Spain, time for Rahmbo to follow it up. If you have been tracking my rankings this year, please do yourself a favor and fade me.

Mike McNamara: Jon Rahm — A man ready to take the next step. Comes in off two consecutive missed cuts, but I believe his game is where it needs to be. Jon will have success on these poa greens, and when he is on with the long game, very few can match him. Run Rahmbo Run!

Sean Carney: Tommy Fleetwood — Riding with the guy with arguably the best hair in the field, Tommy Fleetwood. He’s got the game, and he’s been close a couple of times. I think Pebble’s layout is friendly to Fleetwood’s game, and he should be able to cash in on some short holes.

Jack Corrigan: Dustin Johnson — There is nobody more fit for this Open than Dustin. In my mind, a guy not only extremely familiar with this course but also motivated by the play of close friend Brooks Koepka. We all root for our friends to win but as a competitor you know there is some jealousy. Dustin has underachieved in the majors in his career and time is moving quickly for him. At this moment it is just about now or never time. We talk about Rickie never winning 1 major, but in my mind it is crazy Dustin only has one more than Rickie. I believe DJ hoists #2 this week.

Bear: Phil Mickelson — This man. This week. Nobody else but this man.

The stars were out and about on Day 1 in Austin, but there were plenty of surprises as well.
Episode 49 is live!
‪🚨AMATEUR HOUR IS BACK 🚨‬
Helluva week with Chase down in Jupiter. More to come for season 4 on the Amateur Hour including stories from our trip and season predictions.
When you’re the last sibling still waiting to find love.... you channel your @rickiefowler and embrace it all😂😂
THIS IS MAJOR! Episode 47 is live and it is a big episode for many reasons. We finally have Major Championship Golf, Ladies and Gentleman. We start this week’s episode off with an in-depth preview giving our picks and going over major storylines, such as Spieth hunting a slam, Tiger, and more.
It’s always special when you get to interview “THE INTERVIEWER.”
Episode 45 is live! We are proud to officially announce our partnership with @GolfCritique. The CEO Jeremy Lee joins us and touches on his visions for the company, how the idea got started, a 25K prize, some big-name brand ambassadors, and much more! The boys discuss Bryson’s dominance at Rocket Mortgage, and make their picks for this week’s Workday Charity Open. @54urlacher @katiekearney @holly.sonders @golfergirlem and our man @jeremyleepga are all teamed up to better the future of the golf world and make it easier, so at the very least give it a click!
Woooow tough question. What do you think?
My Tweets
Loading Comments...
Comment
×
%d bloggers like this: