-Big weeks from Frank, Tony, and Mike as they grab another Top 5 for themselves.

-Disappointing week across the board otherwise. 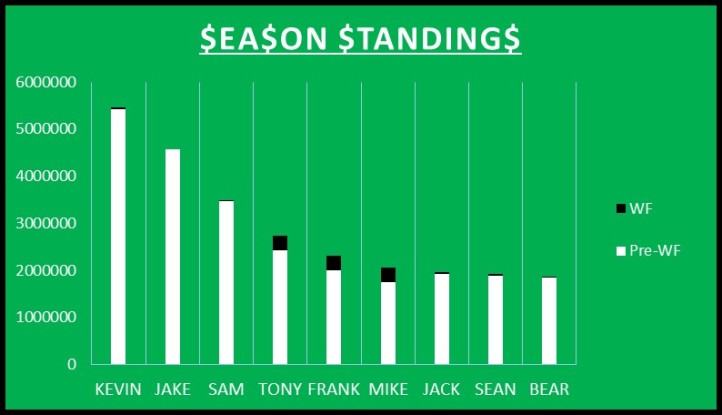 Mike climbs out of the cellar all the way to 6th.

Kevin Walsh: Ryan Palmer — We’re in Texas. Palmer just won his first event (with Rahm) in a long time. Now he gets a chance to show off for the home crowd? Sign me up. While the odds of Palmer going b2b are slim to none, I believe he can contend at a course that should suit his game and his spirits as high as they’ve been in quite some time. Momentum can be quite a powerful thing, and I am banking on that this week.

Jake Mulholland: Thomas Pieters — Simply put, I love this guy. Back in early February I wrote that Mr. Pieters would crack the top 20 by season’s end. He’s been in hibernation up to this point but I have no doubt he has been grinding to improve his game. At the time of my prediction Pieters sat at #79 and he currently rests at 91. After this week I anticipate he will be making his run at the top 20 and a win should help him get there. I am a bold believer, a ruthless rapscallion, and above all an unforgiving usurper! See QOTW February 12th for reference. Fight on Mr. Pieters, now is your time to shine.

Sam Scherman: Keith Mitchell — Sure to be a chalky pick but this course sets up perfectly for him as seen by his finish last year as well as recent play. Keith bombs the ball (3rd in my model in Driving Distance), 7th in SG: Ball Striking, 15th in SG: T2G, 6th in BoB% and Opportunities Gained, and 7th in Par 5 scoring. His best putting surface by far is Bermuda and on top of all of that, he’s coming off of another Top 10 finish. I think Keith stays hot and gets me my much needed 2nd win of the year.

Tony Kasper: Thomas Pieters — Finally have a week to build off of after Casey secured a 4th place finish for me.  I’m saving Brooks for a major, although he’s tempting to use here since his talent can simply overpower a weaker-than-normal field.  Instead, Pieters is a name that stuck out to me.  He’s making his 2019 TOUR debut this week and he’ll look to fine tune his game stateside before the PGA, where he quietly finished 6th last season in St. Louis.  Don’t be surprised when the former Illini’s name is near the top of the leaderboard Sunday afternoon.

Frank Laterza: Rafa Cabrera-Bello — AKA “BABABABA”, the hang loose tour man is tracking to a solid weekend on tour. He struggles around the green, but at Byron Nelson that stat really isn’t all that important. Even with those struggles, hes 31st in strokes gained total, and that’s good enough for me to continue using big players. Paul Casey got the train started, RCB will continue the tour on the second leg with a solid weekend showing.

Mike McNamara: Thomas Pieters — As stated in my QOTW write-up I believe the time is coming for the Belgian. Trinity Forest should be right up his wheelhouse given the wide fairways and minimal trees. I expect Thomas to use his length to attack this golf course, and he is more than capable with the flatstick.

Jack Corrigan: Marc Leishman — Papa Bear Leish has a tremendous history here but sporadically also can miss a cut. Figured he gives me my best chance at a win with the men I have left. The way I have been this here it is go for broke every week now. If Marc wins you best believe the beersman with be enjoying several Leishman Lager’s.

Sean Carney: Brooks Koepka — This is an angry pick from me this week. I’m in win now mode and my window is closing on making a move. With that being said, I am rolling with the favorite this week, Brooks Koepka. I think he is going to be playing fired up after being triggered by some of Brandel Chamblee’s comments. In addition, his game is pretty damn good too. The course should be playing long with some expected rain this week. The fairways are as wide as any course they’ll see this year. I can see Brooks grabbing a W heading into next week’s Championship.