One and Done Picks, RBC Heritage

-Congrats to Sam and Kevin on their dubs. Just a massive, massive payout.

-Rickie and JT played really solid golf but just couldn’t quite get into real contention.

-Jordan, Rory, and Deki were meh.

-Paul and Rosie were, uh, shit.

Sam and Kevin utilize that 2 million to make huge jumps.

Kevin Walsh: Brandt Snedeker — My OAD career has probably peaked picking Tiger at Augusta last week, but the show must go on. Now in the thick of the race, strategy becomes a bit more important. With that in mind, and a smaller purse this week, we are taking a chance with Brandt Snedeker at the RBC Heritage. Sneds is a guy who isn’t striking the ball particularly well, with putting and short game saving majority of his tourneys. With some of the smallest greens on tour this week, I expect Brandt to use that ability and put himself in the mix if he can keep it in play off the tee. Less drivers could be beneficial here as well. Brandt is a guy who seems to run hot and cold on any given week, so he is always a threat to contend or be way back. We’ve been good together so far in OAD previously, and hoping the mojo continues in Hilton Head. That’s Brandt.

Jake Mulholland: Matt Kuchar — “Harbour Town annually ranks as the course with the fewest drives over 300 yards and shortest average distance on TOUR; just 267 yards off the tee.” Courtesy of DraftKings Playbook. The 7,099 yard course also sports one of the lowest average GIR rates on TOUR year over year. The champion this week will have to demonstrate deft touch around the greens and line some 3 woods and driving irons into the fairways. Kuchar value isn’t quite where I want it to be but the stats are there this week: 7th in SG: Approach, 18th in Proximity, 4th in Ball Striking, and 1st in GIR.  In my compiled stats attached, he also matches Cantlay with the most points when considering SG Approach, Scrambling, Ball Striking, Putting, Form, and History. Kuchar has been dang near perfect all year so it would be my luck for him to fall out of the Top 25 this week. Only concern I have is in regards to his durability. Thus far he has proven to be unbreakable. If Cantlay wins, I’ll be livid! 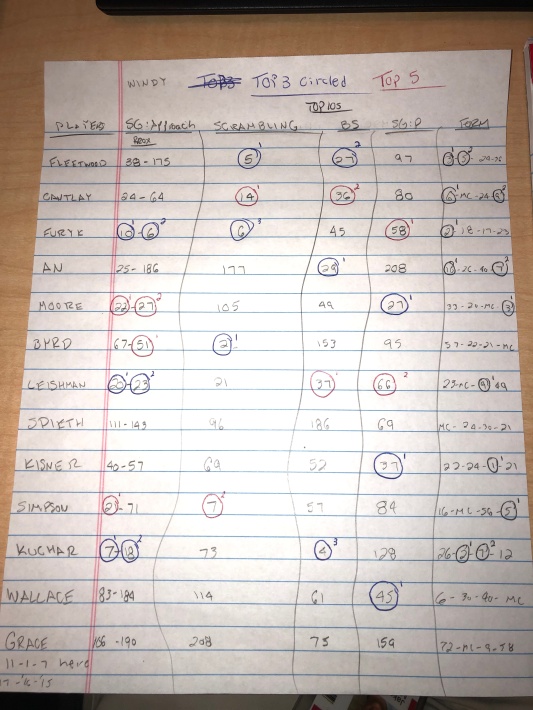 Sam Scherman: Brandt Snedeker — Hot off my first win of the year by taking the GOAT, I’m going to take an RBC guy and hope the conditions stay as predicted: NASTY. Snedeker just missed the cut by a bunch at the Masters, a place I thought he’d play well, so he doesn’t have that fatigue factor and if the conditions are as gusty as I think they will be (Friday could be 40 MPH winds and rain), Sneds has the ability to flight it low and avoid those big numbers. He’s returning to his best putting surface, Bermuda, and has seen good success here with a win and 2 Top 20 finishes over the last several years. I like him to contend in a week where people will be off due to recency bias of his missed cut.

Tony Kasper: Jim Furyk — I loved Tiger’s victory, but last weekend’s results stung for me OAD-wise. Chalk was king yet again and Hideki disappointed after his Saturday charge up the leaderboard was ruined by a double bogey on 18. I’m turning to Captain Jim in hopes of a rebound down in Hilton Head. It’s hard to ignore how well he’s been playing of late, highlighted by a runner-up finish at The Players last month. He won here in 2015, and I think Jim has another solid run in him this weekend.

Frank Laterza: Si Woo Kim — Last year, I threw 10 dollars on the former Players champion at 100/1, because when a Players champion is 100/1 at a subpar field, you obviously donate to the cause. But in this case, the guy was WINNING. Winning by so much that all he needed to do was hit 1 of these final 4 putts on the last 4 holes:

He missed every single one of them, and went on to lose the playoff. So what do I do? I go back to the well of pain. Why do we fall Bruce (Si Woo)? So that we can learn to pick ourselves up.

Sean Carney: Xander Schauffele — Going with Xander Schauffele this week. I liked the way he looked last week at Augusta. Schauffele has a Top 25, at least, in 8 of his last 9 tournaments. Not that I had a bad week with Fowler last week, but it’s time to try and make a charge, and I think Xander gives me the best chance to win this week.

Jack Corrigan: Ian Poulter — IJP, Poultergeist, The Postman, or whatever you want to call him, I am rollin with that man this week. He is in good form, he has a top 15 in his last two attempts here, and I love tracking this guy. His game sets up great for this course, and my season is in the shambles right now so I am hoping IJP can resurrect it.

Mike McNamara: Branden Grace — Save a wretch like me Branden.

Bear: Matt Kuchar — I am at a loss for words. My research this week consisted of me going to the “My Picks” tab and picking a name that semi-stuck out to me. Straight hunch.