One and Done Picks, Valspar Championship

-Everyone rode a player in the Top 15 in the world. Worked out well for half the group and awfully for the other half.

-The lone Fleetwood and the DJs get the biggest payday of the week with their T5. The 73 on Sunday by Fleety really had to sting Tony though, as nobody else finishing in the Top 10 ended above par. Missed opportunity for a huge payday.

-Rickie sandwiched two stellar rounds with two weak rounds going +2, -5, -4, +4. That Sunday round was two shots off high round of the day. Woof.

-5 doubles this week from Brooks! Not great!

-An opening 76 for Jordan (and Mike) was insurmountable.

-Sadly its come to the point that anything Sam touches turns to sh!t. He has to turn it around at some point, right? 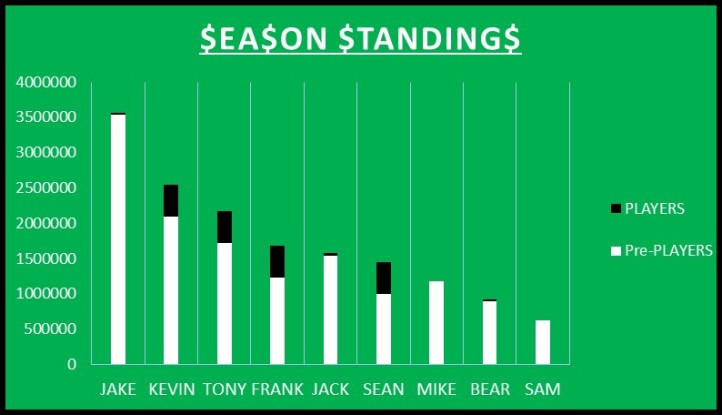 Some movement in the standings as Sean and Frank leap over Mike and Jack, respectively.

Jake Mulholland: Patrick Reed — March Madness is here! Possibly my favorite time of the year with the Masters less than a month away. In the spirit of the Madness that is forthcoming, I have decided to take a similar approach to this year’s Valspar. No statistics will help you fill out your March Madness brackets, so why should statistics stand in the way of my OAD pick this week at the Valspar? This week Im going off of pure feel…and my gut tells me Reed is going to get it done this week in Innisbrook. A disappointing second place finish will jazz him up as he sets his sights on his win #1 for 2019. Cheers.

Kevin is currently on the grounds at Valspar performing the final analysis for his OAD pick. Stay tuned.

This week was a tough one for me. As Bear mentioned I am in Tampa (major shoutout to the man Max Homa for tix), so between gathering content for the Pod, playing my own rounds, and browsing the course, I have not had much of a chance to get into the details of the OAD process. However, after venturing around Wednesday, I have decided to roll with a man who I maybe saw the most of in my time there: Henrik Stenson. The Ice Man was one of the first players I saw, and we followed him for a few holes. His first tee ball wasn’t great, but he followed with some great strikes a solid birdie on his next hole. Most of that is irrelevant, though. What turned the tide was his playful tussle with a snake nearby a pond on #3. Henrik showed no fear, walking up to the snake, staring it down, and even playfully poking it with his putter. What an absolute legend. Given the “Snake Pit” is the term of the week at Copperhead, I see no better omen. He’s no stranger to success at The Valspar, but has had very scratchy form in 2019 and is quite frankly not in a winning groove. However, he has been trending in the right direction, and while this pick may be a bit early before he really turns it on, it’s a risk I’m willing to take. Let’s catch lightning in a bottle!

Tony Kasper: Kevin Kisner — I’m going to continue a familiar theme with my selection at this week’s Valspar Championship.  Tommy Fleetwood couldn’t go wire-to-wire last weekend after stumbling late at the API, but salvaged a top-five finish.  Similarly, Kisner let an opportunity for a bigger payday slip away the past two weekends.  He was right in the thick of things at both the API and The Players, but mediocre rounds Sunday kept him from closing the deal.  He stumbled to two Top 25 finishes, but I expect Kiz to contend this weekend once again, only to close this one out at Innisbrook.

Jack Corrigan: Webb Simpson — Jim Furyk, Luke Donald, Jordan Spieth, Charl Schwartzel, Adam Hadwin and Paul Casey line up the names of recent winners. These golfers all tremendous ball strikers and not overly long hitters. Webb Simpson has been a great tee-to-green player and has been as consistent as anyone on Tour for over a year. For some reason I believe his focus is entirely here this week, and he gets himself into contention. Oh yeah and riding with Chasin’ a Dream (Mike McNamara) doesn’t hurt my luck.

Frank Laterza: Brandt Snedeker — T5!!! Let’s stick with this no research thing. He played well at The Players despite a shaky flat stick. That turns around, and Brandt probably gives us another T5 this week. Honestly, it’s not that hard.

Mike McNamara: Webb Simpson — Interesting week with some big names and then a bit of a drop off in overall talent. Give me a guy that’s been ultra consistent and won’t be afraid of the Snake Pit. Webber has been putting at an elite level, and I expect him to be dialed in with his irons this week in Innisbrook. Give him some good reads Paulie!

Sean Carney: Tyrrell Hatton — I am riding a purely gut call this week with limited statistics or recent form to back me up. I am riding my guy, Tyrrell “T-Bone” Hatton. Hot off missing the cut at The Players, he has missed two of his last four cuts. He has won overseas, but not on the PGA Tour. My thinking is I am going to target a guy, who is one of the better guys in the field this week and hope he comes out ready to try and get that first W in a weaker field. T-Bone should be ready to bow up this week.

Bear: Jason Day — In full field events, Day has not finished below 13th this season. Yet, he hasn’t finished better than 4th. I think this is the week he makes the jump, though. With a T8 at Sawgrass, his withdrawal at the API appears to be completely behind him. Hoping the fact he hasn’t played here in 6 years keeps others away. Time to go low Jason!

Sam Scherman: Kevin Kisner  — 7 straight cuts made and not someone who needs to be “in form” to show hot fire, I think Kiz gets it done this week after a close call at the API two weeks ago. He has a 28th place finish or better in his last 5 starts, although his finishing place is not indicative of his play, as he’s gained strokes on approaches in 6 of his last 8 tournaments and was Top 10 in SG: T2G in the aforementioned API before being hindered by a cold putter on Sunday (-2 SG: Putting). Kiz can avoid the big numbers, and at a course where par is your friend and the winning score should be around the high single digits, I like him to capture his first title since the 2017 season.

Countdown to The MastersNovember 12, 2020
Time to go low!