One and Done Picks, API

-An exciting Sunday finish was not that exciting for us, as no one had someone truly in the mix.

-Maaaan that would’ve been an unreal call by Sam on Im if he could have held is 36 hold lead. 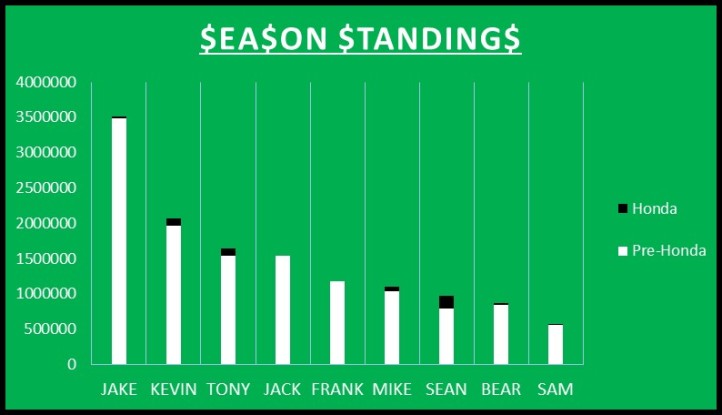 Jake Mulholland: Justin Rose — The Sanford-Rouge curse lives on! For those unaware, I lived in Austin, Texas with a good friend of mine and fellow graduate of the University of Virginia. We both worked at Oracle as Business Develop Reps on the same team and were roommates. Last year was our first year in the OAD pool and Ben (BSANFORD23) finished 2nd in the pool of 76 or so players. I finished 10th (MoulinRouge). Our careers began at the 2018 Sentry Tournament. Dating back to week 17 of the 2018 season, we have shared a pick on 4 separate weeks. Disclaimer: there was no collaboration between us for OAD picks. Our first time together, we chose Phil Mickelson @ the Wells Fargo Championship. He played well and finished 5th. It happened that this tournament would be our lone ride together in 2018 and 281,050 points was not too shabby for our partnership.

Fast forward to week 10 of the 2018-19 PGA Tour Season. We have shared three rides, one with Noren which resulted in a missed cut, a second with Bryson which turned into 100,788 points and our most recent was last week at the Honda with Gary Woodland. If not for the unbelievable putt on 18 that locked Gary in at +2, we would have shared another MC together this year. In sum, we have compiled 126,134 points across three tournaments. Sitting @ 3rd in the Pool, I cant afford to average 42k points a week.

With guys like Hooded Four Iron at the top with 3 wins already in 2019 (record pace for 36 tourneys in this pool), I will need to rack up at least 100K on average a week (I think). Nonetheless, up until about Noon today (March 6th), I had locked in Poulter as my OAD for the week. He has been phenomenal of late and seems to have the right confidence, short game, and ball striking the winner of the API will possess this weekend. But there was something wrong with this pick and until today I couldn’t quite determine what it was. For some reason, my gut told me my fellow Virginian had also taken Mr. Poulter. After we chatted about the upcoming tournament, my addiction to TaylorMade golf equipment and how things are going for both of us, I decided to hit on who he was picking this week for the API. I traditionally stick to my own research and roll with the best pick that I believe will provide the most results for the given week, but with the curse at large I knew I had to call my friend down in ATX. Unsurprisingly, my gut was right and Mr. Sanford was indeed planning on rolling out the feisty Englishman. Because of that I was off Poulter and onto Rose. A safe pick, a chalky pick, but one I hope will help gather the momentum as we head into the thickest and most entertaining part of the schedule. Backing off of Poulter, I am hopping to appease the entity holding the Sanford-Rouge curse over our heads.

Kevin Walsh: Patrick Reed —This week gives you a plethora of options when picking a one and done. The studs like Fowler, Rose, Koepka, and McIlroy are sure to get a lot of love, and with good reason. The next tier of Day, Leishman, Matsuyama, and Fleetwood are all men who have had success at Arnie’s Place. This week I am rolling the dice a bit, and going with Patrick Reed. A man who despite being in relatively good form with recent Top 25s, will be overlooked with the strength of this field. Reed’s stats are nothing to write home about (yet), but he has improved at the API every year going MC, 52nd, and getting all the way up to 7th last year. That kind of improvement tells me he could be taking a liking to Bay Hill. Combine that with a world class caddy (former Podcast guest Kessler Karain), Reed’s desire to get back in the winner’s circle, and a weekday pairing with Rory McIlroy to get the juices flowing, and we could see Reed come out ready to play. I am hoping he will be more consistent with his ball striking this week and am counting on his competitveness and putter to give him a chance this weekend. Once a perceived Hero as Captain America, Reed’s reputation has taken a bit of a hit lately. The best way to counter that is with a W, and we all know Reed wants one.

Tony Kasper: Ian Poulter — I’m hoping his mediocre history here will keep him from being too trendy, but the results of late speak for themselves. A third place finish in Mexico extended his top ten streak to four, making him quietly one of the hottest players in the world. In a loaded field, I think he could provide value to those looking to save some of the top dogs for a bigger event down the road.

Jack Corrigan: Jason Day — Quite frankly I have got to go for the win. I was between Day and Stenson, but Stenson is just too inconsistent right now for me. Day is a former winner at Bay Hill and a man that is red hot. I am going to keep this short and sweet, Day is in a consistent and great form, similar to Rory, all he is missing is a win. I believe this is where he needs to be to find confidence. His putter never fails us and being a Par 72, he can take advantage of the Par 5’s with his long distance. I have faith in J-Day this week.

Frank Laterza: Hideki Matsuyama — The time has come to stop saving big dogs. We are ¼th of the way done, and the results aren’t there. I’m going with Hideki this week, and hoping for a back-to-back win here at Arnie after taking Rory last year. The stats speak for themselves on Hideki, coming in 25th off the tee in SG, 5th in approach, and 3rd tee to green. Why haven’t wins been coming? The putter, of course. He ranks 163rd in SG: Putting. Now, this won’t change in a week – probably ever – but if he can have a remotely average week on the greens, with his long irons, especially in the 175-200 yard range, ranking 12th in proximity, I think should set up enough chances to score. Driving accuracy does scare me, but his distance off the tee at this monster of a track cannot be denied. Just hope we don’t see too many one-hand follow-throughs.

Mike McNamara: Kevin Kisner — Bay Hill is the site of 1 of my 2 career OAD wins so we return to familiar grounds this week. Who do I turn to in a week where I desperately need to make some headway? None other than Kiz himself, at a place where he once held a 54 hole lead. A good portion of Kisner’s best golf has come in the Southeast region of the country, and I like where his game is trending heading in. With the recent purse bump from two years ago, the API is an event where you need to capitalize, and I trust the unflappable Bulldog to put a spark into my season. Go Low, Go Dawgs, and Go Kiz.

Sean Carney: Bryson DeChambeau — Going to go with a guy who has been as hot as anyone in the world these past 9 months, Bryson DeChambeau. DeChambeau was close last year, here, coming in a solo 2nd. Obviously, I really like how Bryson has been playing of late. To do well at Bay Hill, you will have to take advantage of Par 5s. Bryson ranks 3rd in Par 5 scoring and hoping that will be enough to get him in the winner’s circle this weekend.

Bear: Patrick Reed — Honestly I’m just sick and tired of my pathetic standing right now. I want to be on a guy who plays ticked off — enter Patrick Reed. Reed hasn’t finished worse than T22 this year, but has yet to crack a Top 10. I’m sure he’s as ticked off at his performances than I am at mine. Here goes nothing.

Sam Scherman: Hideki Matsuyama — Coming off of 2 Top 20 finishes, a 9th, and a 3rd in his last 4 starts, Matsuyama has every ability to compete in this loaded field this week (and any other week). He is an elite long-iron player and since 33% of shots, on average, come from 200+ yards out, I will look for him to build on that strength and his elite SG: Ball Striking ability to capture a win this week. Each week it’s the same story: Will he putt maybe just average? Hideki has played very well at Augusta in recent years, and I look at that as a corollary for these very fast greens and am hoping he can find the same success with the flat stick this week, too. I think he gets a win at Arnie’s place and gears up for a strong major run this season.