One and Done Picks, WGC Mexico

-Sean wins the week with a T9 from Rahmbo. A double bogey on 17 on Sunday cost Sean a decent chunk of change, though.

-Fleetwood Mac was largely mediocre this week. Cam Smith made a bit of a charge during Round 2 but couldn’t sustain it for an entire round. A week summarized by mediocrity. 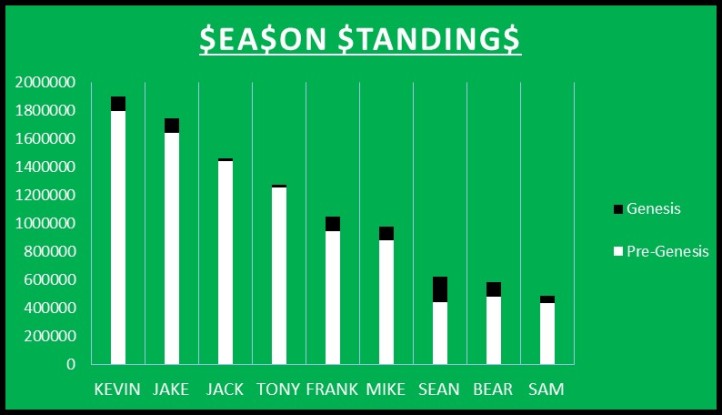 No major moves made this week, but Sean did pass Bear moving further from the cellar.

Kevin Walsh: Jon Rahm — Yeaaaa, I know. It’s a chalky pick. And I’m not thrilled about it! But when researching this event, and looking ahead to where I want to use some of the other big names, I couldn’t get off of Rahm. He’s been knocking on the door with 5 Top 10 finishes in a row, and we know he is itching for another big time win. I think this week is one of his best chances to get it done. He’s stated his love for the course, and his game checks out, ranking 8th in SG: OTT and 11th SG: Total. With fairways being narrower than usual, I believe Rahm will continue his strategy in the past of using the altitude to his advantage and deploy his driver miles down the fairway to pick up strokes on the rest of the pack. If he can dial the approaches in and putt just well enough, he will be right there on Sunday, and may darn well take the thing home. Vamos el Rahmbo!

Jake Mulholland: Dustin Johnson — When in doubt, throw your gut away and hit the history books. After the WGC introduced the event @ the Club de Chapultepec in 2017, there have been two winners: DJ in ’17 and Phil in ’18. Both of the past two winners have slotted within the Top 10 the week prior @ Riviera for the year they won. With that said, I’ve concluded that DJ, more than all other candidates fits the mold of a champion this week in Mexico. Given the payout for this week’s tournament, I figured there was no better time to risk it on my favorite player than now. DJ jumps back into FedEx Cup Playoff contention, Rouge jumps back into the Top 10. DJ didnt fall down the stairs @ the Masters… he was pushed :-0

Jack Corrigan: Bubba Watson — Mr. Mudball is a golfer who seems to play well at the same courses year in and year out. He is not the most consistent golfer on Tour, and his putter looked dreadful last week. But with the altitude helping long drivers at Club De Golf Chapultepec and a Top 10 here last year, I see this week to be prime time for Bubba. Hopefully by Sunday we see some waterworks action and a trophy in his hand.

Tony Kasper: Sergio Garcia — I think last weekend’s scheduling debacle wore out many players, so I am going to steer away from big names who have played frequently to start the year (such as JT, Rahm and Leishman) due to potential fatigue. At the same time, the Club de Golf Chapultepec greens are set up similarly to the greens at Riviera, so players who competed in the Genesis Open should not be ignored. That brings me to Sergio, who is not my favorite guy on Tour, but I have to pick with my head and not my heart.  He played last weekend and has a strong history at this event with a 7th and 12th place finish. Now, he has missed 8 of his last 12 cuts on Tour, which would normally remove anyone from my short list. However, I think he is simply due to return to form after a poor 2018 season. That begins this weekend in Mexico City.

Frank Laterza: Xander Schauffele — Throw it up, throw it up. The X, of course. Fitting that it’s Rihanna’s birthday, the X man should be throwing up the money by tournament end. Leading in FedEx cup points, Xander comes in off a T15, T10, T25 and a win in his last 4. After a horrid 3 over Thursday, Xander shot 9 under the rest of the tournament last weekend in some testy conditions. He hasn’t missed a cut all year, and won’t this week either, I guarantee it, *wink*. T18 here last year in his debut, I expect him to improve on that finish. Only 70th off the tee, his lack of distance will be negated by the crazy Mexico elevation, which should enable him to attack with his irons and the long stick. 3rd in SG total, the X will be thrown up Sunday.

Mike McNamara: Alex Noren — Wrestled between Tommy Fleetwood and Jon Rahm all week but making a last minute audible to the Swedish workhorse. Lackluster form to start 2019 will provide low ownership, but I believe he started to turn a corner in Phoenix. Rested last week and will be ready to go at a course he finished 14th at a year ago. Some weeks you need to go against the grain and this is one of them for me. Go Alex, Go!

Bear: Sergio Garcia — Sergio puts the Saudi fiasco behind him with a W this week. Obviously its a loaded, but I’ve already used some big names and wanted to stay out of the top tier of guys. That led me to Sergio, who plays well here with a T12 and a T7 the last two years. He was mediocre at Genesis last week, but I don’t see that as an issue. Vamos!

Sean Carney: Tiger Woods — Pulling him out earlier than I planned on, but I am going with Tiger Woods. Honestly, I love what I have seen from Woods. Seems like he is starting to be more accurate with his driver. With the altitude this week, drives will be traveling 10-20% farther than normal. At that point, I am targeting great short iron and wedge players and why not choose one of the best of all time.

Sam Scherman: Webb Simpson — This week we’re looking for a guy with strong wedge play, can scramble when he misses the green, and is able to handle the bump Poa greens, and to me, that’s Webb Simpson. In his last 4 starts, Webb has led the field in proximity from 100-125 yards, including 12.2 strokes at the Tournament of Champions, a potentially corollary course to Club de Chapultepec. A consistently strong ball striker, we’ve all seen Webb drastically improve his putting over the last year, he ranks one of the highest in the field in Scrambling, and he is Top 10 in Bogey Avoidance. If Webb can keep it in the fairway, he should have no problem getting hot and dominating the field at such a short course.