We are adding another staff member into the mix, Jake Mulholland. He’s a guy that eats/breaths/sleeps golf and actually has had a great start to the OAD season slotting in at 3rd place. Let’s take a look at last week’s huge bounce back results before we see Jake’s first pick.

-Woodland used a 66 on Sunday to sneeeak into the Top 10 for Frank, Bear, and Sam.

-Rory and Day were great most of the week to secure a Top 5 for Tony, Mike, and Kevin. Tony avoids his 3rd straight MC, while Mike and Kevin secure their best result of the year so far.

-Course horse Sneds couldn’t produce much for Jack, while Noren produced nothing at all for Sean. 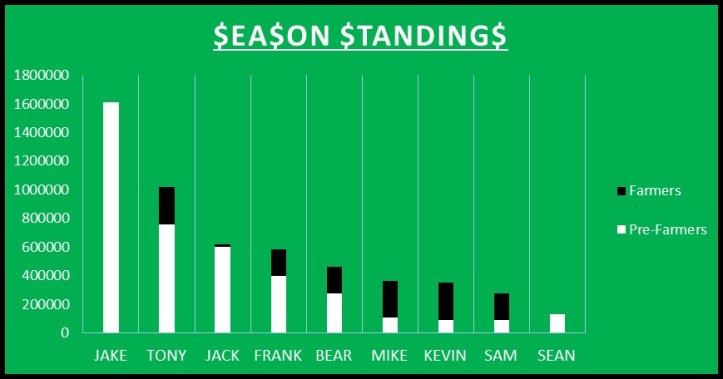 Jake’s win from Week 1 with Xander has him leading the pack. Solid week from most of the other guys to help close the gap, though.

Someone here picks the winner this week. I can feel it.

Jake Mulholland: Tony Finau — Big T is one of the most humble men on the tour and a player that is renowned for living under the radar while posting Top 10s week over week. In week 5, I’m rolling with what I call the “Value Approach” and I see great upside with the majority of the pool riding the Kuchar, Woodland, & Matsuyama wave. Finau’s three MC’s from 2016-18 will scare away the majority of pool members & his strength of pairing (Kuchar/Fowler) will keep him focused before the cut line is solidified. Tony’s value add (anticipating less than 4 on him) and low key attitude is one that I love going into this year’s WMPO.

Tony Kasper: Phil Mickelson — Phil began last season strong out West and has done the same to start 2019.  Following that trend, I will take him before the Florida swing and before he becomes the trendy pick at his home course next week (Pebble Beach).  He has finished T-16 or better here the last three years and won the event in 2013.  I expect Phil to come out motivated after a week off, knowing he let one get away at the Desert Classic.

Jack Corrigan: Phil Mickelson — The Hometown Kid! Phil played phenomenal a couple weeks back and something tells me he’s extremely hungry. I do not see Phil being consistent down the stretch this season, and that is why I am taking him early. 6 years ago he came in and dominated this tourney. We saw some magic last season, and I believe he will bring it again.

Frank Laterza: Billy Horschel —  I simply cannot take Matsu with half of the pool, and I have bigger plans for JT and Rickie. So this is the biggest gut call of all time, please do not read this or tail me. Thank you.

Bear: Tony Finau — Can’t get myself to do chalk. Just can’t. I’ll ride a consistent as heck player (at any course) instead.

Mike McNamara: Justin Thomas — Extremely risky maneuver here, but such is life in a 95 man OAD pool. I’m rolling out one of the best players in the world at a track he’s never finished in the Top 10. I watched him tear up this course a year ago and simply unraveled on a two hole stretch on Saturday where he went triple/double and shot himself out of contention. As Cersei Lannister once said, “You either win or you die” and we are not here for middle of the pack finishes. I expect to get great value out of JT and I believe he gets his 10th career victory at the “Greenest Show on Earth.”

Kevin Walsh: Webb Simpson — After a good week last week, it is crucial to keep the momentum rolling. So who am I turning to? Good ole Webber. Simpson has been one of the most consistent players on Tour over the past year and has been chomping at the bit for another W.  Interestingly enough, a great course history (no worse than 14th from 11-17′) preceded a MC last year. I am not letting that scare me though. Webber has been one of the best Bermuda players over the years and this is a tournament he knows he can win. With Pauly on the bag and Webb well rested after a solid TOC, this duo is more than ready to perform. With studs like Rickie, Matsuyama, Rahm, and JT teeing it up, I am hoping Webb can play his game and produce a great finish while allowing me to use those boys later on. Cheers.

Sam Scherman: Billy Horschel — Rolling with a good form guy this week as he comes in with 3 straight Top 25 finishes. Horschel excels in the key metrics of winners/Top 5 finishers at TPC Scottsdale: Hitting GIRs (8th in the field over his last 12 rounds, 6th over the last 24 rounds, and 1st over the last 50 rounds), gaining strokes on approaches (2nd in the field over his last 24 rounds and 12th over the last 50 rounds), and scoring on Par 5s (ranks in the Top 25 in the field over the last 8, 12, 24, 50, and 100 rounds). Going back to last June, Horschel has gained strokes on the field in 11/15 and gained on approaches in 10/11 tournaments (SG: APP not tracked in every tournament). If he can get an average to above average putting week he’ll be right there come Sunday afternoon before he watches Brady take home his 6th Super Bowl ring.

Sean Carney: Bubba Watson — To start the year, Bubba hasn’t been in great form. To date, his putting has been absolutely atrocious. Watson has had some success here. Hoping this is a “Bubba track” and he can find some success with the putter because he should be able to attack some shorter Par 4s and gettable Par 5s.