-Did not think it could get much worse than last week. Boy was I wrong.

-Jack went chalk here, and it really worked out as he was the only person to put up anything substantial this week. Great week out of Hadwin. 4 really solid rounds.

-Ancer and Putnam played fine for Frank and Bear. They join Jack as the 3 guys who have yet to have an MC this year. Not great considering there’s only been 2 cut events to date.

-Two straight MC’s for Tony, Kevin, and Sam. Will they go with a big name to ensure a made cut this week? 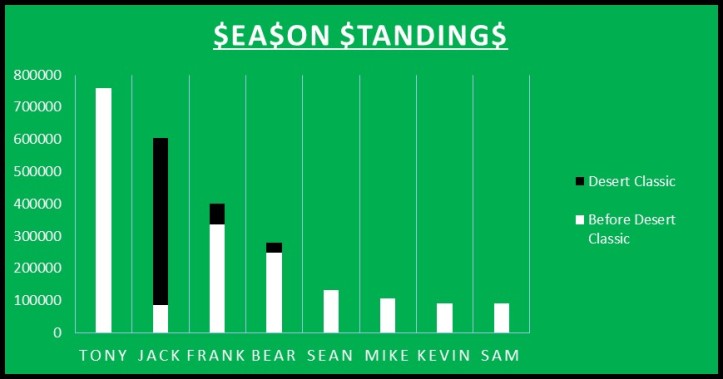 Jack the clear winner this week as he makes huge strides with Hadwin’s T2. Who else will stop their slide this week?

I’m feeling a big bounce back week for everyone this week, let’s get it:

Tony Kasper: Rory McIlory — While he has the second best odds this week, it feels like he’s flying under the radar a bit compared to the other favorites (Rahm, Day, Rose, Finau, Woods).  I’m assuming that’s because he is new to this event.  He may be a trendy pick anyways, but he’s in good form (three Top 10’s in his last four starts) and his game fits this course well.

Jack Corrigan: Brandt Snedeker — Sneds is in fine form leading into Torrey Pines where he has won twice before and had numerous Top 10’s. I believe Brandt has enough confidence coming in to flirt with his 10th career victory this week. For options of places to use Sneds, this has to be #1.

Frank Laterza: Gary Woodland — He had his first tournament of the new year stolen from him at Sentry and now comes in to a tournament he knows well off a weeks rest. For the past 3 years, he has had the following blow up rounds: +10, +3, and +3. He still managed T18, T20, and T12, respectively. He hits the ball far enough and hits plenty of greens (78.3% GIR) to be in the mix here. The newly signed Puma athlete will be there come Sunday.

Sean Carney: Alex Noren — Backing the Swede this week at Torrey Pines. He finished 2nd here last year. I think he’s a guy that is a horse for the course that could be somewhat overlooked with some bigger names here. Going to bank on some Leishman/Rahm/Sneds chalk and hope for some value with Noren.

Mike McNamara: Rory McIlroy — After three pedestrian weeks and a current position near the bottom of the leaderboard, it is time to unleash a top dawg. Rory looked the part at Kapalua, and this is a course where his elite ball-striking can really shine. The first of multiple victories for Rory McIlroy in 2019 comes at Torrey Pines.

Kevin Walsh: Jason Day — Let’s not beat around the bush folks, I’ve had a rough start to the early season, failing to make a cut in a standard field. Some may begin to lose faith, but you know what they say: the night is always darkest before the dawn. I am about to go on a run, and I’m starting it with Jason Day here at the Farmers. Through 6 starts at this venue, Day has 4 Top 10’s with 2 victories, although 2 MC’s as well. Day has been sporadic for a good year now, but that doesn’t scare me as he is motivated for a title defense and loves the grind of Torrey Pines. He is at his best when he has to focus the entire round, and I’m counting on his putting to make up for the inevitable wayward drives. If he can keep it decently straight off the tee, we could be looking at a back-to-back.

Sam Scherman: Gary Woodland — Coming off a 2nd place finish a few weeks ago where he made no mistakes but was beat by a red-hot Xander, I think Woodland gets it done this week for his 2nd win in the last year. As mentioned in my article, he’s a perfect fit for this course as he’s a Top 10 Ball Striker, a bomber, strong with long irons, and can score on the Par 5s. Gary has finished Top 20 here 3 straight times and 10th in 2014, showing he knows how to play Torrey, and I expect to see him at the top come Sunday evening.