One and Done Picks, Desert Classic

The first normal (full field/cut) event of 2019 did not suit us well. We clearly have some rust to shed off, but we got a looong way to go:

-I mean… woof. Just not great across the board. But it’s early and it’s just one week.

-Cameron Smith played solid (4 rounds in the 60’s), but couldn’t replicate the first round 66 to get into the serious money conversation. Bear and Sean definitely feel like they could’ve gotten 6 digits out of Cam this week, but it just wasn’t in the cards.

-Poults also put up 4 rounds in the 60’s. He, too, couldn’t take that next step to get Frank any substantial coin.

-Matsu’s 65 on Saturday gave him (and Mike) a realistic chance for a backdoor top 10 on Sunday. He followed that 65 with a 73, which was tied for the second worst round on the day. Sunday night, Mike was reached for a comment: “Deki birdieing the last 3 holes on Saturday made me believe a little, but it was all for nothing.” Not quite nothing Mike, that 15K separates you from being tied with Sam and Kevin in 81st place!

-As for Woodland, Casey, and Perez, always a yikesy week when your guy doesn’t complete 4 rounds. 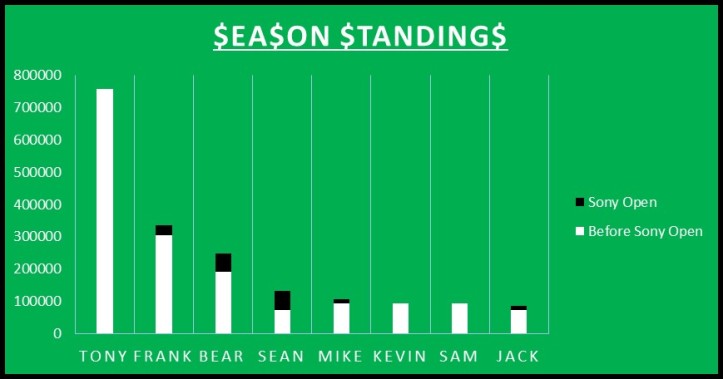 Congrats to Sean on winning (?) this week by dropping the least amount of places in the standings!

I’m feeling a big bounce back week for everyone this week, let’s get it:

Tony Kasper: Bud Cauley — Looking to bounce back after a MC last week, I’ll roll with someone who has a strong recent history in this event. I considered Hadwin, who has three top 10’s the last three years. He’ll likely be a chalk pick, so I’ll go with Bud’s consecutive top 15 finishes in his last three years here instead.

Frank Laterza: Abe “The Answer” Ancer — I hate this field. I hate this tournament. You won’t be able to watch your on at least 50% of his rounds, unless it’s Rahm, Rose, or Phil, but Abe hits the ball dead straight off the tee, and you by no means need to be a bomber here. His putting has improved tremendously, and he had a great fall swing. If his irons can be simply average in the field, I think he has a chance to top 10. The Ancer will rise this week.

Bear: Andrew Putnam — I’m riding a hot hand here in AP, with solo second last week and 3 straight Top 15s this season. He’s been the best putter on tour this season (#1 in SG: Putting), and I fully expect him to continue rolling the rock this week. Career win #2 on the way for the Pepperdine graduate lacing em up in SoCal.

Sean Carney: Aaron Wise — We’re hoping Aaron makes me look like his last name this week, Wise. Wise, a California native, should be fired up this week playing in front of some familiar faces. Have to hit birdies at this tournament to contend and hoping Wise’s high birdie rate will hold true.

Mike McNamara: Peter Uihlein — Top 20 in his first trip to La Quinta last year. Poised for a breakout 2019, and I think it starts this week. Expect the bomber to be right there come Sunday afternoon, and he will not be afraid of the moment.

Kevin Walsh: Aaron Wise — I’m not a huge fan of this tournament and don’t want to burn Rahm here, so I am rolling with a guy who has serious firepower to go low if he gets hot. Distance is not a problem for Wise, so I am hoping he takes advantage of the Par 5’s and creates some hometown magic in his return to the West Coast.

Sam Scherman: Ryan Palmer — He didn’t play in the Hawaii swing which is normally the kind of guy I like to target here, but I like Ryan Palmer to capture his first win in several years and remedy his playoff loss to Jason Day at Torrey Pines last year. Palmer’s last 2 starts were a 7th place finish at the Shriner’s and a 3rd at the CJ Cup overseas, and he has excelled at this course in year’s past, posting a 6th in 2013, 2nd in 2014, 10th in 2015, 17th in 2016, and 20th in 2018. He hits some of the most greens in the field, makes birdies in bunches, and has historically gained more strokes in the California swing than anywhere else on TOUR. The past year we’ve seen many “non winners” win, so why not Palmer?

Jack Corrigan: Adam Hadwin — Call me Jack Chalk, I don’t care. Adam Hadwin is a grinder and for some reason, he finds this course extremely easy and has been extremely successful here. My Gary pick from last week may have the fans down on me, but Adam Hadwin didn’t miss an 8-foot putt to force a playoff last week. Gary obviously did not get that out of his head going into Sony. Bear with me here; I believe Adam is a legitimate title contender here, and I believe he will finish strong.

🚨 🚨 After a long and grueling offseason, the boys are back in town. 🚨 🚨 Episode 37, and the first of Season 3 is officially live. The guys preview the 2020 PGA Tour season, make their picks for the majors, and have some announcements for what’s to come in 2020. 👀 Link in Bio. We are ready for Year 3.
Be sure to check out our epic interview with Max Homa. A look back at Episode 36 from last week. We brought on Max Homa for his 2nd career appearance on the Ammy Hour. Max touches on what it was like to take down some of the game’s best at Wells Fargo, vents about the final season of GOT, shares some WMPO stories and much more....
When we had him on last December, @shanelowrygolf told us he planned to avenge what happened at Oakmont in 2016 and go win a Major Championship. Today he did just that, taking home the Open in his homeland. Pints on you next time we’re across the pond Shaner! Cheers lad! 🏆🍻
🚨 🚨 Episode 35 is Live. 🚨 🚨 After a short hiatus the boys are back and this was one of our favorite episodes to date! We sit down with the #1 ranked amateur in the world and one of the future stars of the sport @cole_hammer. Cole talks about how he got his start in the game, his career thus far with @texasmgolf, juggling academics with golf and a social life, some goals for next season, his love for Blake Lively, and much more! To conclude we make some picks and predictions for the JDC and Scottish and look ahead to @theopen. #LinkInBio #LongWayToGo
🚨🚨🚨 Episode 34 is Live 🚨🚨 We bring on one of the rising stars in the game for our Walter Payton Episode in @vincewhaley. Vince touches on his college days playing for @georgiatechgolf, his goals for the rest of the year on the @webdotcomtour, his chase of the @pgatour and a whole lot more! The boys give their picks and predictions for the @pgachampionship this week in what should be one of the more entertaining majors in recent memory. #LinkInBio #LongWayToGo
Our question of the week is a Game of Thrones/PGA Tour crossover: Which golfer would be your ideal fighting partner at the Battle of Winterfell? #LinkInBio #GOT #PGATour
A journey it’s been! Cheers @tigerwoods feel free to stop by our studio soon. #15
🚨🚨 Episode 33 is Live 🚨🚨 Get your Hump Day started off right by tuning in to this episode! For Masters week we bring on the man who was on the bag for last year’s champion. Kessler recaps the Sunday round at Augusta last year, talks about his bond with @preedgolf, gets into the Ryder Cup, details his bowling battle with @mikemcnamara33 down in Austin, and much more! The boys give their Masters longshots and their picks on who will be taking the green jacket in 2019. #LinkInBio #LoooooongWayToGo
Great seeing good friend, beer drinker, and now World Golf Champion Winner @k_kisner @dellmatchplay Put on a clinic this week and we fully Expect him in Red, White and Blue come December. #ThatsKiz
My Tweets
%d bloggers like this: