ALL INFO PROVIDED AND PLAYERS, MATCH-UPS, ETC. ARE FOR SUNDAY MAIN SLATE ONLY

Key Resources I use every week that you should too:

Well people always talk about regression in DFS and “running good” or “running bad” and I got WAXED this past week as I took an approach of only about 5 GPP teams and a cash lineup that I felt good about but just missed in all the wrong places. I loved Conner as my favorite play on the slate and he performed as the overall top DK scorer but after that… not much went right. I don’t hate the process I took but what happened was me targeting the right teams/matchups but having the other receiver go off; for example, I loved JuJu’s spot but we saw him post a rough 7.3 DK points while AB caught 2 TDs. In the lions game, I loved Golladay’s spot but we saw Marvin Jones go for over 100 yards and 2 TDs. It was a bad week in which I picked the correct RBs and very wrong WRs and TEs… so it goes and we move on.

On the other side of the ball, we get to see FitzMAGIC back in action. We know that TB will most likely be throwing all game and while Carolina presents a much stronger defense than TB, they are still susceptible at the WR2 and TE position. Desean Jackson always presents massive play potential and he’s the flier I would want to have on this side of the ball over Evans because: 1) the price savings and 2) he doesn’t need to get peppered with targets to provide value since he can always break free for a 50+ yard TD. O.J. Howard has caught a TD in 2 of his last 3 games and has seen target counts of 4/9/4 over that same span along with posting 60+ yards in each of those games. Despite the presence of Cameron Brate available to take some targets, I think Howard presents a nice floor and is cash game and GPP viable.

As for the Vikings, what is to be said about Thielen that hasn’t been already? The dude is incredible and has 8 straight games of 100+ yards, is averaging 12 targets a game, and 30% of the target share for the team. Diggs appears like he’s going to play and although he’ll most likely be shadowed by Darius Slay, he has the ability to get open against anyone. He’s averaging 10.6 targets a game and 25.5% of the target share for the team. With Cook set to most likely miss again, Latavius Murray should have a solid floor intact despite his ceiling not being exactly “slate-breaking.” Detroit does have a horrific rush D so Murray should definitely be considered nonetheless. Lastly, Rudolph presents a decent value option this week at TE as he’s only $3,600 but it’s always hard to know what his role will be week in and week out. He only has 2 TDs on the year and has yet to top 60 receiving yards in any game. He’s a cash game saver but a risky one at that…

Key WR/CB Matchups: 1 to 5 with 1 being easiest and 5 being hardest 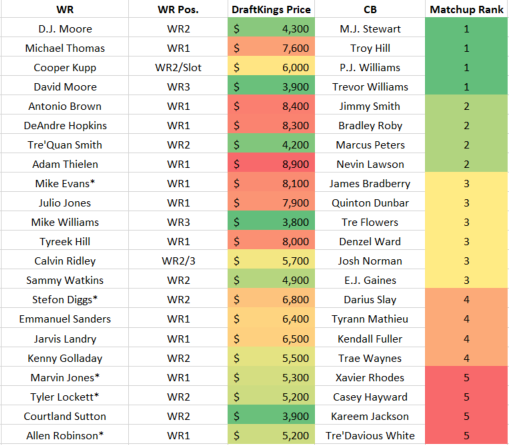 -Notes about the above: A “*” means likely to see shadow coverage; these are predicted CB coverage