A Tree Branch for the Ages

Two days have passed to digest the most prestigious golf tournament that the season has to offer us, and there are many story lines that one could go into: Patrick Reed – the man who lived long enough (or finally won a major tournament to turn the spotlight on his past) to become the villain – holding off the young guns to win his first Green Jacket; or Rickie Fowler, who for the first time in what seems like forever did NOT fold on a Sunday, and pushed the tournament to the brink of a playoff. Then, there is Jordan Spieth, my pre-tournament winner, who gave us a record breaking round, to only come up short by the grace of a tree limb. 1 inch higher, or lower, and we may have seen Spieth approach to 10 feet, and hit a putt to go to 15-under, putting even more pressure on Reed – who, for what it’s worth, did not crack once all weekend (see his put on 12 which came after a bogey on 11). One thing is for certain – we will never know. But what we can do is recap what the man did on his record setting Sunday, one that got my hungover, sore, and tired self to get off the couch, and scream about a man hitting a ball. Remember, Jordan started Sunday at 5-under, 9 strokes off the lead. The lowest score ever? A 63 – 9 under par. I imagined a top 5 was in reach (+250 prior to the round), but a chance at the jacket needed a lot of help. We almost got it. Shall we?

Hole 1) I wrote how tough 1 could play, and it showed for Jordan throughout the week, as the first 3 days he played it at 2 over par (+2). But before the round, he admitted that this may be his ever stress free round at Augusta, knowing the mountain he had to climb to even be in contention may be too steep. So what does he do? He sticks his approach shot to 7 feet. Birdie opp, Birdie make. -1 on the round, -6 total. 8 back. Patrick Reed does not tee off for another 20 minutes or so.

Hole 2) We also talked about how 2 was a good hole to bounce back on in our course outline, especially with the way 1 historically plays difficult for the players. However, Jordan had played this hole at even par the first 3 days, which is part why he started the day 9 back. But on this stress free Sunday, he stuck his second shot 25 feet for the hole. His Eagle putt was a beautiful lag, and he tapped in a 2 foot putt for birdie. -2 on the round, -7 total. 7 back. Reed has about 8 minutes before he tees off.

Holes 3 and 4) On both 3 and 4, we saw the brilliance of Scrambling Spieth, as he failed to hit the green on both. On 3, his approach trickled off the back of the green, but was able to up and down from about 27 feet, sticking a chip shot to 5 feet and making the comeback par putt. Then on 4 – another hole that is a monster par 3, that Jordan had played at even on the week – he found the bunker on the short side of the green. The way Jordan had been struggling out of the sand, this may have been where he gave 1 back. Not so fast. He put his 2nd to 3 feet, and rolled it home for par. Still -7 total, and now 6 back (Reed bogeyed 1).

Hole 5) This pin location was an absolute doozey. Leave it short, and you were 2 putting at a minimum. Go long, as Rickie Fowler did, and a bogey deemed to be a great score. It actually played as the 6th hardest hole on Sunday, with only 6 birdies. Yes, one of them was Jordan. He got his 207 yard approach shot to stick to 3 feet. Another Birdie opp, another Birdie make. -3 on the round, -8 total, still 6 back (Reed birdied the 3rd to move back to -14)

Spieth said that after going -3 through 5, he said he started to feel like he a shot to go at this thing (the Jacket), but not once did he look at the leaderboard (allegedly)

Hole 6 and 7) Jordan hit a fantastic lag putt to about 5 feet from 50 feet away and sank the par putt on 6. 7 was more disappointing, as he had a downhill 5 foot putt for birdie after a fantastic second shot. But he ran it by, a little more than 3 feet by. The type of putt that makes your butt tighten. But that’s why he’s Jordan Spieth, and I was on the couch on this Sunday. He buried that too. Still 6 back from Reed.

Hole 8) 8 was a beautiful hole, for a few reasons. His drive was crap. He only hit it about 280, leaving him 265 to the pin. But it plays a little uphill, making it longer than the yardage. Still, he took out his hybrid and had a go. 30 yards. We expect an up and down, and we got just that. Art work from Spieth, as he played his typical skip-skip-halt chip shot to 3 feet, and tapped in for birdie. -4, -9 total, and 4 back (Reed has bogeyed 6)

Hole 9) Through 8 holes, Jordan has 11 putts, which is fantastic, and why stop now? He absolutely RIPPED his driver 338, one that I felt from my seat, where I have not moved for a good 2 hours now. His approach shot came to a little over 12 feet. The putt? Buckets. -5 through 9 holes, -10 total, and still 4 back (Reed bounce back birdie at 7)

Credit Reed, whenever he Bogeyed, he would always bounce right back. He played perfect Sunday golf. AND HE MADE EVERY PUTT.

Hole 10 and 11) This was the final stretch of holes we touched on last Monday, and while 10 was surprisingly easy on Sunday, 11 played as the hardest hole on the course. But Jordan is dialed in, and he 2-putts his way to par on both. Still -10 total, still 4 back of Reed. Anything ever happen at the 12th hole before?

Hole 12) Spieth admitted that the tee shot on 12 was probably the most pressure packed shot of his life, as he threw his arms in the air after it settled safely just deep off the green. What happened next sent everyone in a frenzy. A 28 footer from just off the green trickled in, and brought him to -6 for the day. The 12th hole demons were conquered, I stood up for the first time, and it was on. -11 total, 3 back.

Hole 13) You would have to convince me that there was a better shot than the one Jordan hit on 13. From 234 out in the pine straw, he ripped his hybrid that JUST cleared the water, and landed to about 12 feet. I figured that was the most Jordan would get the crowd to go crazy – hint, it was not – and he had a look at Eagle. Now, I love JT, but his putt for eagle came from the same angle, and it trailed off right at the end. I think this really got into Jordan’s head, and he started his putt way too left, and it never came back. You never want to say “wow that birdie hurt!”, but here, it did. Still, -7 on the day, -12 total.

Hole 15) Jordan birdied this hole all 3 days prior, so why not today? A 2 putt birdie put us to -8 on the day, -13 total. But when Reed giveth, he then taketh. Almost identical position to Jordan, and right after Jordan birdied 15, he poured in his own putt on 12. Still 1 Back. 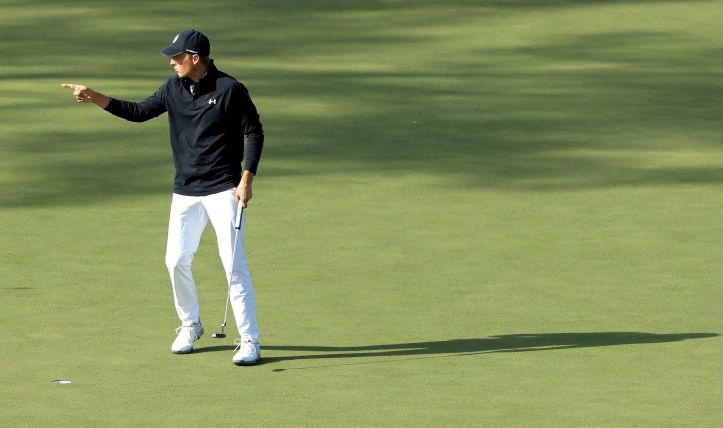 Hole 16) I know earlier I mentioned that his 2nd shot on 13 would be the most he could make me excited. 16 is a hole that has had some major drama over the years: with holes in 1’s and Tigers legendary chip and awkward caddy celebration after that stick out. Jordan’s tee shot wasn’t the best, and he had about 33 feet left for birdie. Bring in JT again, who had about 45 feet for birdie on the exact line. Justin’s’ putt ran past the hole (he would double, and cost those of us who bet his round UNDER 70 a pay day), but Jordan went to school. Prior to putt I told a friend I would absolutely pound a beer if Jordan did what Jordan does.  The double breaking putt, poured in from 33 feet, and Augusta erupted. A golf advocate at the hole was quoted saying, “it was the loudest I’ve ever heard it in 3 years at Augusta.” Jordan himself couldn’t believe it, as “are you kidding me?” rang from his mouth towards his caddy Michael Greller (shout out Greller’s Army). 1 beer “pounded”, -9 on the day (remember, the course record), -14 total. Tied for the flipping lead.

Hole 17) Playing as the 2nd hardest hole, Jordan gave himself a look at birdie from 18 feet.  It seemed the magic may had run dry, as it just rolled past. Par. Still, -9 for the day, -14 total, but now 1 back, as Reed would get 14 after an incredible second shot that stuck to 8 feet.

Hole 18) If you weren’t able to watch on TV and were following shot tracker, you would have seen Jordan Spieth’s tee shot go a mere 177 yards. Frankly, that’s about average in my friend group, mostly because the ball was able to be found and in play. But in professional golf, that’s V bad. The cause? 1 freaking tree branch. ON THE VERGE OF THE GREATEST ROUND EVER AT AUGUSTA NATIONAL. 1 tree branch. UGH. But that is sports, and it’s why we love every second, even through the hurt. Still, Jordan battled, as he had done all day, and gave himself an 8 foot par look. He expected left to right movement, but he never got it. First bogey of the day. He would finish with the best Sunday round ever recorded at the Masters, an 8-under par 64. 13 under for the tournament, and a 3rd place finish. 5 years at The Masters, and only 14 people have been able to beat him in those trips combined.

The Open Championship last year was the best 6 hole stretch from Jordan I’ve ever seen, but this Sunday, on the biggest stage, was the best round I’ve ever seen. It was a pleasure to watch. Jordan said he is honored to be able to play the Masters for the next 40 years, and I, for one, am honored to be able to watch. 359 days until the 2019 Masters. Let’s do it again, Jordan.